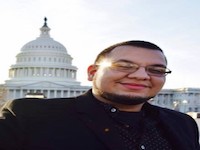 Nicolas Hernandez, University of Texas at Dallas, Bachelor of Arts, 2016

Nick grew up in Pleasant Grove and attended Skyline High School. He decided to attend college to escape from his neighborhood and become an inspiration for his family. He saw the financial strain that his family endured, and knew an education would help to change this.

Nick began at community college before transferring to the University of Texas at Dallas. While at UTD, Nick faced extreme financial hardships forcing him to work four jobs. He realized that he was drowning trying to balance his work obligations with his academics and then sought out ScholarShot.  ScholarShot served as a huge support system and alleviated his financial stress in his final year of college. They even intervened in financial affairs where Nick was ill-equipped to navigate.

In 2016, Nick became a first-generation college graduate. He obtained a Bachelor’s of Arts in Political Science and currently works for RAICES, Refugee and Immigrant Center for Education and Legal Services. He was recently promoted to Community Outreach Support Specialist where he travels around the community and educates refugee and immigrant families on their rights and links them with necessary resources. His degree attainment has inspired family members to pursue college including a younger cousin that recently graduated and two other cousins that are enrolled as Education majors at the University of North Texas.