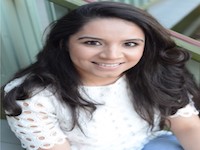 Estefania was the salutatorian of her senior class in 2009. With a high class ranking and straight A’s, she automatically accepted to Texas A&M. She joined the Corps of Cadets and enrolled in the fall of 2009.

ScholarShot met with Estefania at the end of her first semester of her freshman year. Despite her determination, she had 1.30 GPA. When we asked her if there was one thing she would change to improve the outcome of the next semester, she replied, “I’ll buy text books.” Estefania is like a lot of great kids graduating from high school these days. She got into college, but didn’t have a plan. ScholarShot worked with Estefania to build a SuccessMap to be sure she could meet the academic and financial requirements of college.

By the spring of her sophomore year, Estefania was off of academic probation. ScholarShot funded the gap between her scholarships and grants as she continued to follow her SuccessMap. She graduated in May 2014 and is now a Human Resources Specialist at Austin Commercial. Estefania’s first-year salary is more than two times her total family household income. (WOW!) And the success continues—her younger sister is also a ScholarShot Scholar who graduated in 2015.